Always in
the picture
Iberotel Hotels & Resorts is always newsworthy.
Find out here the latest news about our locations and products.
We look forward to hearing from you.
Show full screen 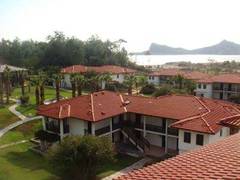 In October a strong storm has caused a lot of damage in the bay of Sarigerme at the Turkish Aegean. The Iberotel Sarigerme Park was the most affected hotel in the region. The storm has unroofed the houses and numerous trees were uprooted.

As of April, just in time for the upcoming season the very popular hotel for TUI guests will reopen. Until then all damages at the beach and the restaurant will be overhauled and the whole outdoor furniture including sun sails will be replaced.

A landscaping-concept for the new planting vegetation and design of the garden will be implemented as well. Furthermore all roofing activities will be finished until the end of February.

The hotel is a pioneer for environmental protection and sustainability. The Iberotel Sarigerme Park is one of the leaders of the TUI Environment Champions for over 15 years. In addition the hotel belongs to the TUI Holly winners, which honors the best resort hotels in the world.

Just in time for new season

Looking for a romantic wedding venue? At Iberotel Boltenhagen couples now can get married at the...

Looking for a career in hospitality? Iberotel hotels and resorts is still hiring. We offer great...